I know there is supposed to be Cute of the Week every week (hence the name), but I’ve been kind of lazy with updating my blog lately, so I’m going to make the post about Lotte World into a Cute of the Week post.

I wasn’t necessarily planning on going to Lotte World (pronounced Loh-tay), but there was a Chuseok (Korean fall harvest/Thanksgiving holiday) discount for foreigners, and a bunch of KU students decided to go, so I thought, what the hell and decided to go last-minute.

Some background on Lotte World: it is the world’s largest indoor amusement park, but it also has an outdoor part that isn’t shabby either. The indoor part was my favorite, though, because I’d never seen anything like it before. Since Lotte World is located in Seoul (it is surrounded by tall apartments), it has limited space. They say necessity is the mother of invention, and it was definitely the case with Lotte World. Since most amusement parks are outdoors and spread out on a large land base, there’s usually a considerable amount of space between rides and shops. Lotte World is crammed in a pretty small space, but the architects/designers did a fantastic, fantastic job with it. With a huge glass dome for a sky roof, an ice skating rink dipping two levels below the main floor, and 3 more levels above the main floor, the indoor park gives off a feeling of being spacious and a fantastical aura of being bigger than life. Here are some pictures if you don’t believe me. 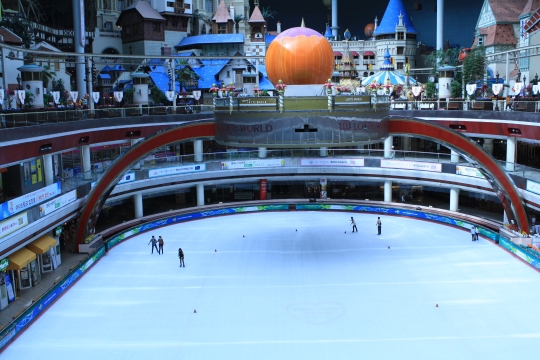 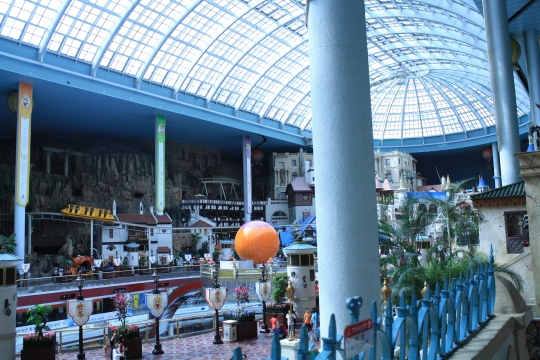 I couldn’t take many panoramic photos because I wasn’t from a high enough altitude to do so. So this is the best I could do :/ However, Lotte World is kind of like a kid’s dream. Just look at the beautiful details! 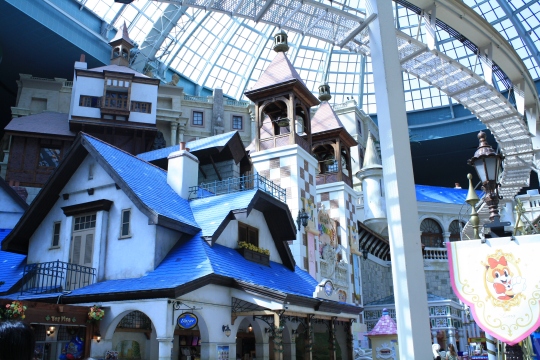 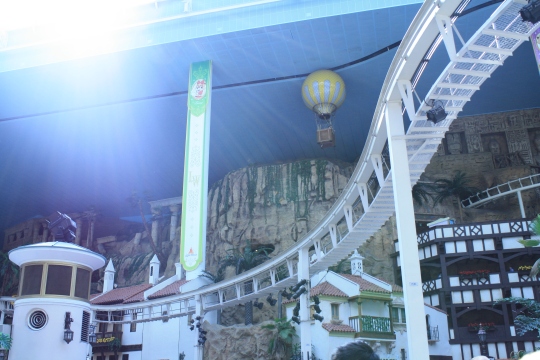 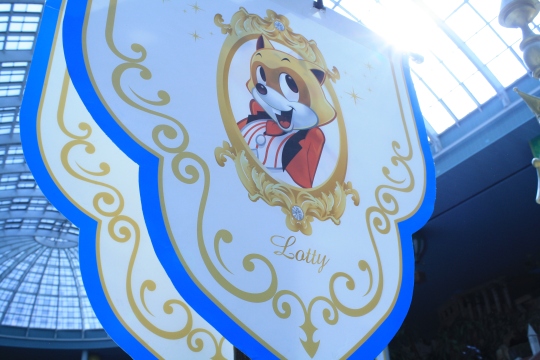 Here’s a list of rides I went on and my ratings of them:

The Adventures of Sindbad (6/10) – This was the first ride I went on. It is completely underground, and you are basically cruising along on a cart in the dark. It’s supposed to tell a story – most of the time, you are moving slowly through dark chambers with mechanical dolls voiced over by actors. It has a Harry Potter/Phantom of the Opera feel to it – mysterious, but pretty boring overall. There are two drops in it – none of which I expected, so I was a bit iffy about them, haha. I would recommend this ride if you want a longer ride and don’t mind a bit of bad voice over acting and unrealistic-looking actors. Don’t wait in line for it if it’s longer than 20 minutes.

The Conquistador (7.5) – This is your classic boat swing ride. I was excited for a bit more excitement, so I rode this after Sindbad, and it wasn’t bad. It was as expected, which is both good and a bit boring.

Giant Loop (7/10) – I was kind of excited by this ride, because it is a full loop. Your cart is on this loop train and it never goes anywhere else. You do full 360 degree rotations, and the concept was pretty cool. The speed is rather slow, so if you’re expecting a fast ride, you’ll be in for a disappointment. However, it was enjoyable, as I’d never been on a ride like it before. I would give this ride an 8, but there was one thing about it I really didn’t like. You are belted in on the top well, but the bottom part (your bottom and legs) aren’t secured well. There were times I was upside down and my legs were literally hanging in midair. This was a bit scary…but overall it was a good ride.

The French Revolution (8) – The concept of this ride is really awesome. It’s a fast-speed rollercoaster basically around the perimeter of the indoor park. It looks beautiful and the loops and drops were appropriate and thrilling. The only setback – and the reason I kind of hate Asian amusement parks – is how much the ride made my head and ears throb. During the ride, there were a lot of fast turns, and the way the seats/ride was designed caused my head to bounce violently from one side to the other, hitting the head rest (which wasn’t really cushioned) quite often. Many friends walked away from the ride with the same complaint. The ride would’ve been so much better without this very basic design flaw. I would still recommend it, however.

After this, we moved to the outdoor park, which is called Magic Island. We actually spent a considerable part of our time in this park, considering how small it is in comparison to the main park. When we got to Magic Island, we were greeted with this beautiful castle not unlike the Disney Magic Kingdom castle. 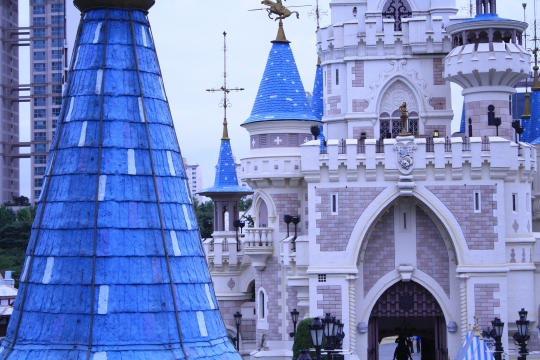 And it kind of astounded me how close Lotte World was to the city of Seoul. Look at those skyscrapers. The people living in them must look outside their window everyday and be like, what is that shit doing here. 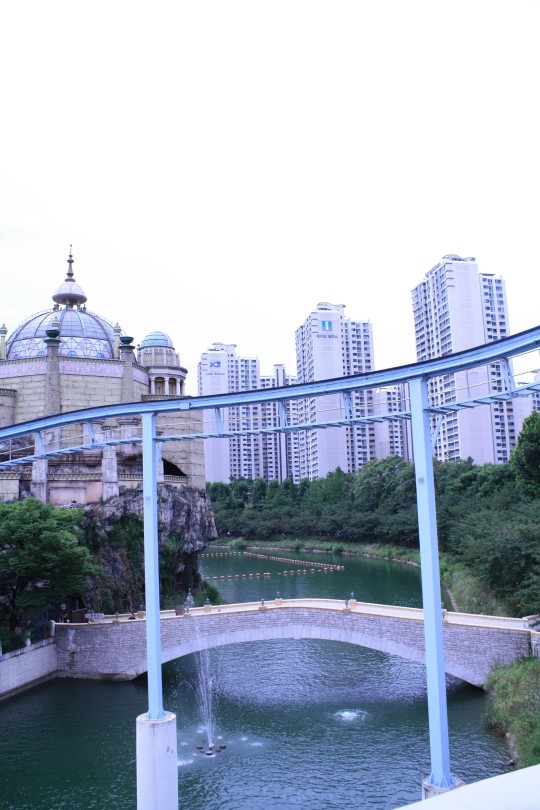 Anyway, back to the rides. Here are my ratings for the outdoor rides.

Swing Tree (6/10): One of my favorite rides, the swing ride. The first 10 seconds were marvelous – I felt like a kid again (and granted, I was one of the oldest people on the ride. 80% of the riders were below the age of 8). And then for the rest of the ride, I felt like I was going to puke. I don’t know what it was about this ride, but it made me queasy for the rest of the time I was at the park. I don’t really recommend it :/

Waikiki Wave (4/10): Wow, this ride really seriously sucked. Like so bad. I thought it would be like the ride Hang Time in Dorney Park (I’m from PA, lol), which is like a two-row seater where you basically flip up and down in a straight line. But Waikiki Wave was like twisting and turning in all the wrong ways and places, and I didn’t enjoy it at all. Not only was it not thrilling, but it succeeded in making me even sicker than before. Definitely wouldn’t recommend this one.

Comet Express (9.5/10): My favorite ride of the whole park. I feel like this ride is a bit underrated, since I never really hear too much about it. But for me, it was one of the best rides I’d ever been on in my entire life. Basically you are in a circle pod with one other person, and there’s a row of about 10 of these. And all ten of your circle pods swirl into a black tunnel of random bursts of fluorescent light and your pods spin freely during its orbit around and around a black hole. Sounds a bit dramatic and strange, huh? I LOVED IT. It wasn’t scary at all, no drops – and I was smiling/laughing the whole time. Since our pods spun, I could see my friends in the pods in front of and behind us and we even waved and talked to each other! The best time I’ve had in an amusement park – ever. I really intended on going back on it a second time, but when we returned, the line was waaay too long – 70 minutes or some ridiculous number like that. I eagerly await the day I return to Lotte World to go on Comet Express again. I’m going on this ride before I leave Korea – I will make sure of it.

Gyro Swing (7.5/10) – This ride looks intense (it goes really high), but it isn’t. In fact, I was a bit underwhelmed. I enjoyed it, yes, but it was less than a minute, and I definitely waited over 20 minutes for it. The swinging wasn’t as intense as I’d hoped, and it definitely would be improved if it had been longer. Still worth a visit though.

Atlantis (8.5) – Actually, this is one of those rides that look pretty normal but turn out to be a lot more intense than you’d imagine (read: The French Revolution). This ride was similar to the French Revolution, except more intense and partially indoors. It looks like one of those canyon splash rides, you know, where you go up a big mountain and crash down into the water and get all soaked in the end. Well, this ride is nothing like that – you don’t get wet, and the mountain isn’t that tall, and the first part of the ride is REALLY FAST. The moment you get on the ride, the attendant at the ride tells you to hold onto the bar in front of you and lean back, not forward. The sign outside the ride tells you to stretch before you ride. They really should’ve made this clearer. The ride takes off at 72 km/hr and none of us expected this. It whizzes and loops and drops at this same speed for about 30 seconds (the best 30 seconds of the ride) and it was sooo much fun. It was amazing. Unfortunately, like the French Revolution, this ride suffers from lack of care taken to human safety. My friend riding next to me said the speed and the turns caused her neck to sprain slightly. I’m a bit surprised with this ride, because the rides I went on back in the States were NEVER THIS FAST. It was slightly bewildering. In the end, though, I would still strongly recommend this ride.

And that concludes my list/rating of rides, since after that, the park became wildly crowded, and we were too lazy to stand in any lines. I hate it when parks become so crowded that you have to wait an hour or more for rides shorter than 1 minute. It’s kind of really frustrating and at that time, I just wanted to call it quits. There were also several attractions I wanted to go on, such as the Mirror Maze, the Ghost House, and the Tomb of of Horror, but they cost money (around 2000 won each). In retrospect, I probably should’ve tried at least one of them. I’ve always wanted to go to a mirror maze. Alas, there’s always next time.

I’m realizing now that this is probably my longest entry to date, and that’s because I really love reviewing things. I wanted to give you guys an idea of what’s good and what’s not good at the park so that when you go visit, you won’t make the same mistakes as I did. Plus, the park is only empty for so long, so you should get to the rides you like most before the lines get ridiculous.

One ride I really regret not going on is the Pharaoh’s Fury. This is apparently the most popular ride in the park and I didn’t even know what it was. The description on the map was this: ‘Take a journey to find Pharaoh’s hidden treasure.’ Whatever that means. Honestly, the descriptions on the park map are hilariously inadequate. The description of the Crazy Bumper Car was ‘Crash into other cars for fun.’ Swing Pang Pang‘s description was ‘Come to join us. Let’s bounce with Lotty & Friends.’ Awkward/hilarious much? I kind of loved it at Lotte World. The things there were kind of stupidly cute and lovable. I’m not sure when I’ll return, but I would like to return in the future sometime :)

And there’s the conclusion of my rather (extremely) long entry. And some more pictures for your enjoyment! 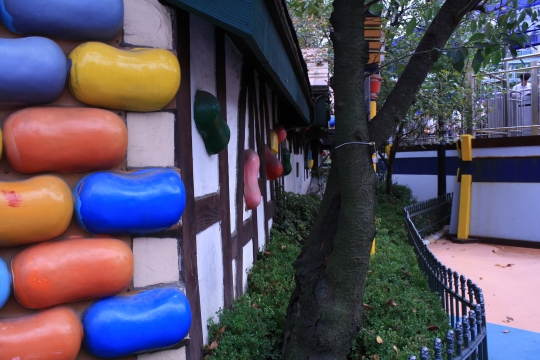 Find What You Want!

Stay out until 5:30 AM, when the subway reopens
Attend the KoYon Jeon (고연전)
Go to Namsan Tower
Try every coffee shop chain in Seoul
Go to the Han River
Successfully bargain in Korean
Have a conversation only in Korean
Go to a LanguageCast meeting
Go to a music program pre-recording
Attend a live music program
Ride a rented bike at Seoul Forest/Yeoido
Come within arms-length distance of a kpop star :)
Go to Seoul Color Park
Go to Heyri Art Valley

this road has been tread